For nearly 120 years, customers have relied on Oklahoma Gas & Electric (OG&E®) Services for power. The oldest and largest investor-owned electric utility in the Sooner State — and consistently ranked in surveys as one of the highest performing utilities in the United States —serves more than 850,000 customers across a 30,000-square-mile area of Oklahoma and western Arkansas.

As part of the OGE Energy Corp., OG&E® takes a balanced approach to generating electricity using natural gas, coal and renewable sources — creating more than 7,000 megawatts of capacity. Miles and miles of transmission lines across varying terrain deliver power to homes and businesses. OG&E® is committed to keeping them in top shape. Many are in rural areas where access and ground conditions can be a challenge. 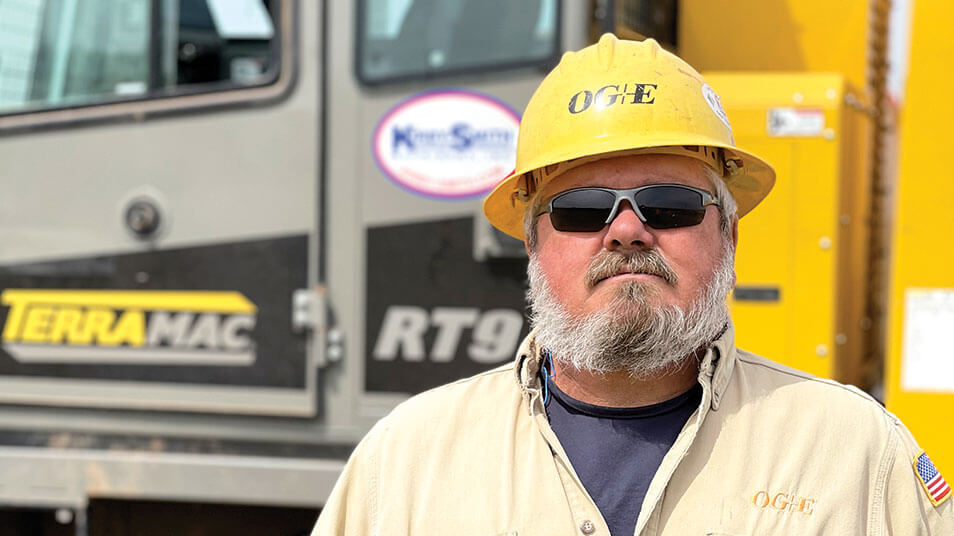 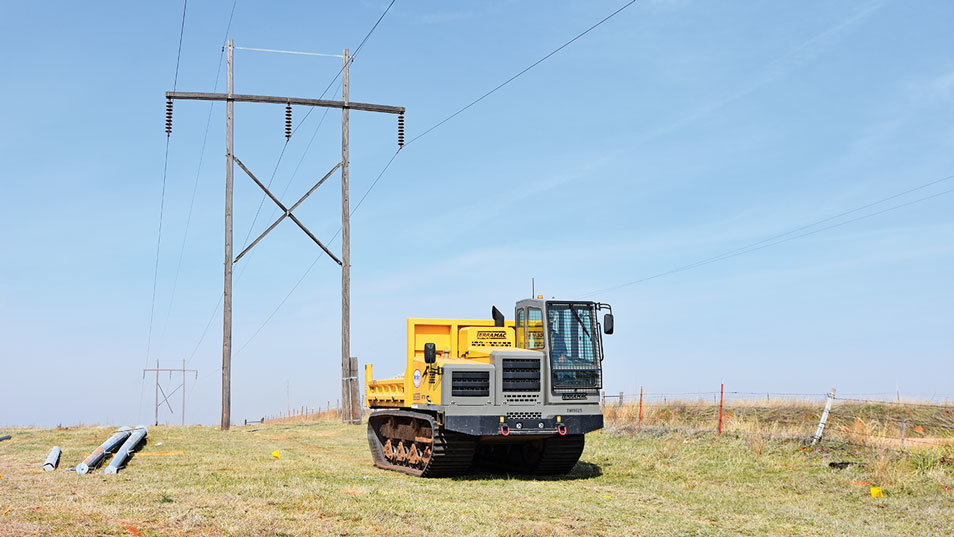 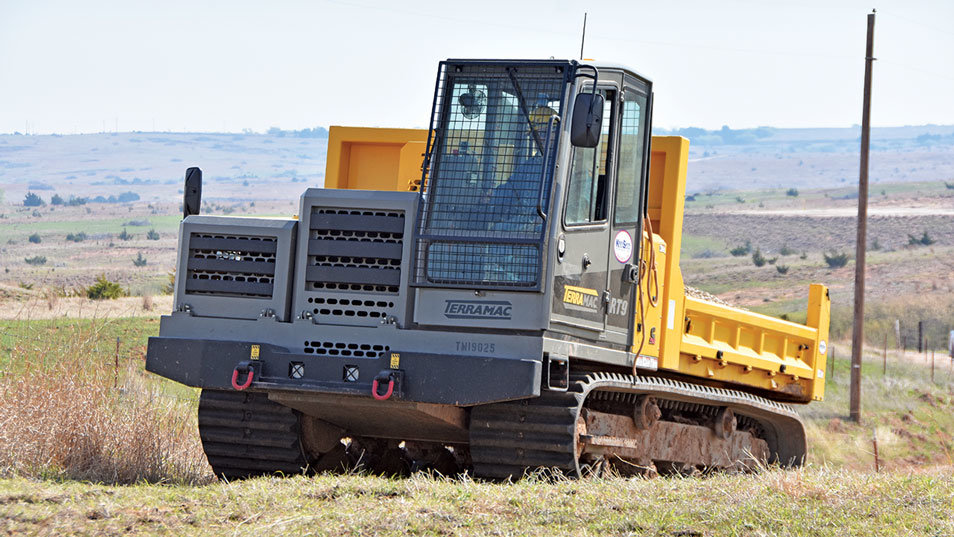 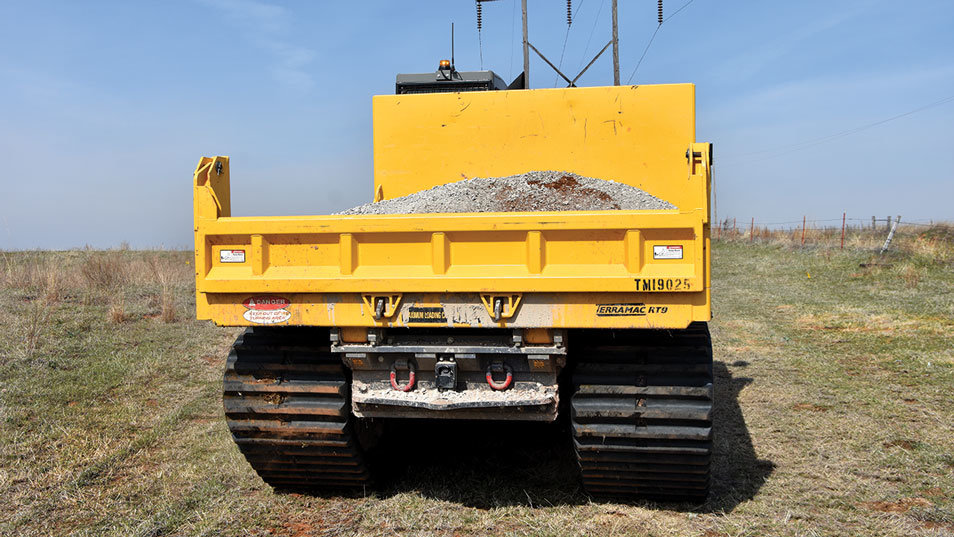 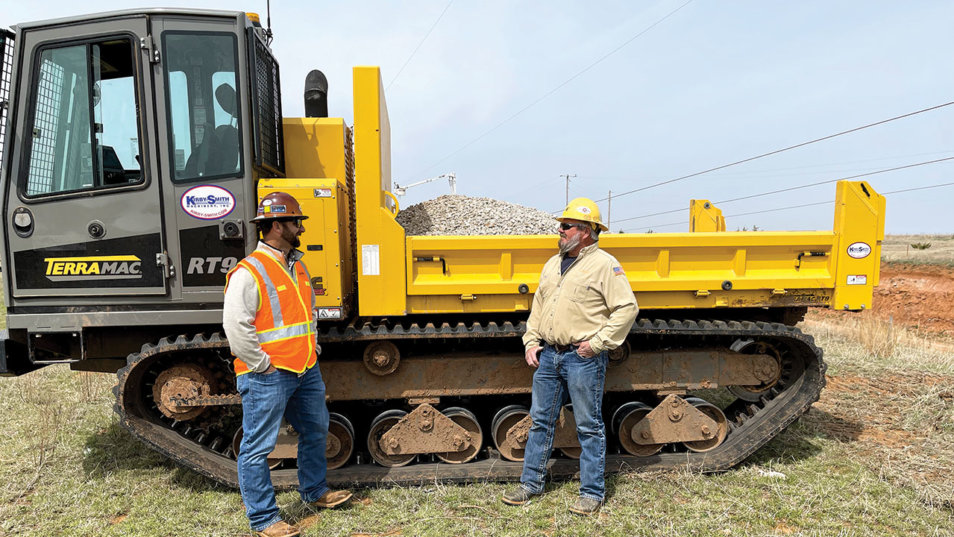 To ensure minimal ground disturbance, and so it can continue working effectively in wet and muddy situations, OG&E® acquired a 26,180-pound Terramac RT9 rubber track carrier (Terramac is an independent company separate from OG&E® and OGE Energy Corp.) from Kirby-Smith Machinery with the assistance of Territory Manager Josh Lee. Fully loaded, it has a ground pressure of 6.4 PSI.

OG&E® recently put the 225-horsepower unit on a project in northwest Oklahoma where a crew is replacing more than 50 miles of line, as well as replacing old wooden-pole structures with new steel ones for longer life and greater durability.

“In many instances, they are located in areas where traditional equipment such as dump trucks or other rubber-tired machines would tear it up considerably or get stuck, so they are not feasible,” Jimmie Walters, Foreman Transmission Construction, System Expansion said. “For instance, we may be working in farmers’ fields or on other landowners’ properties. Our goal is as little disturbance as possible, and the RT9 does that.”

OG&E®’s RT9 is equipped with a dump bed, so it can haul 6-yards of gravel. The maximum carrying capacity of the machine is 18,000-pounds.

“We are currently carrying gravel for backfill,” said Walters. “Even with a full load the RT9 goes through soft ground or over the hills we encounter with no issues. The alternative would likely have been a backhoe with a small bucket to move rock from the pile to the poles, which would have torn things up and taken far longer to get around. That was not cost-effective. The RT9 is.”

Walters said he and other operators of the RT9 like the ease of operation. “It’s joystick control, and the dump button is on top of the joystick that drives the unit. The computer screen has all the gauges right there in sight. It’s very user-friendly.”

He noted that transportability is an added advantage of the Terramac RT9. At 19 feet 6 inches long and 8 feet 3 inches wide, it is easily moved, according to Walters.

“It’s the perfect size,” stated Walters. “We don’t need a permit to haul it, so if we have to load it up quickly – such as for a fast response to a storm in the middle of the night – that’s a great advantage. We’re very pleased with the Terramac, very pleased. It’s just a very good machine and for the work we do, sometimes it’s just a must to have.”

Walters added that Lee and Kirby-Smith have been great to work with. “Any time we have a special need like this, we try to go through them. They do a good job of finding something in a timely manner, and they are responsive if we call for maintenance or repairs.”

Terramac is an independent company separate from OG&E and OGE Energy Corp.