Each year Terramac strives to improve both products and services to better serve our customers. From the start, our mission has been to be the leading manufacturer of crawler carriers and we’re pleased to say we’ve been successful in achieving and maintaining this mission with our progress and growth in 2017. Most notable achievements for the year include the introduction of our smallest carrier to date, continued dealer expansion, and attendance at two international tradeshows. As Terramac makes its way its way into the New Year we’re excited to share more of our accomplishments and provide a sneak peek into our plans for 2018. 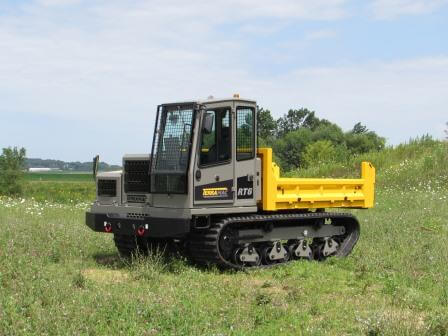 The Terramac RT6 carrier model was introduced during the 2017 ICUEE tradeshow. The RT6 distinguishes itself as the smallest carrier in the Terramac lineup while still featuring the same rugged design and versatility known of Terramac products. Narrowing in on the utility market with this nimble and versatile carrier, Terramac mounted its first digger derrick to the RT6 shortly after the show which just begins to highlight the unit’s customization capabilities. The RT6 production is underway and distribution of the model will commence in the New Year followed by additional industry specific support attachment configurations.

2017 was an impactful year for exposure of Terramac products at international tradeshows as well as regionally based shows. Terramac held exhibits at CONEXPO-CON/AGG, North America’s largest construction tradeshow and ICUEE the international premiere event for the utility industry. Both shows provided Terramac the opportunity to showcase our products to key decision makers and network with existing customers. Regional shows and events were also top priority for Terramac in 2017 as we are extremely focused on localized service and support. Terramac had presence at dozens of regional shows in various industries including: erosion control, pipeline, drilling, mining, construction and utilities.

Terramac’s innovative product line and extreme versatility landed us in numerous industry publications throughout the year. Each publication highlighted our various carrier models, unit features and superb services giving us a competitive edge in the market.

With 2018 just around the corner we are excited to focus our efforts on distribution of all four crawler carrier models which include the RT6, RT9, RT14 & RT14R. We will continue to expand upon our dealer network to simplify and expedite sales and rentals, and provide increased accessibility to our services. Throughout the year Terramac plans to support a variety of regionally based tradeshows to educate industries on the benefits of rubber tracked crawler carriers and demonstrate how they conquer tough jobs. Our partnership with AMH will remain in effect for federal government and military sales, and our own sales team will continue providing the top notch customer service you deserve.